Serving the community since 1999

Excoriation (Skin Picking) Disorder is an obsessive-compulsive spectrum condition in which sufferers repeatedly pick at their skin. Crystal Quater, MMFT, of the OCD Center of Los Angeles discusses her personal experience with, and recovery from, Excoriation Disorder, and how she treats clients struggling with this condition.

“I’m not going to do it, I’m not going to do it”, I repeatedly thought on my way home from work. Yet, once again, I found myself in front of my bathroom mirror, picking at those pesky bumps that wouldn’t seem to go away. When something came out, I felt an overwhelming sense of relief and accomplishment.

Next, I grabbed a needle that I had carefully hidden in a small bathroom drawer and went to town on the stubborn bumps that didn’t respond to mere picking. I thought I was being clever by creating smaller incisions and doing what I imagined my facialist did when my eyes were closed. But when I finished, all I saw were raw wounds and a face that looked worse than it did before. I was left wondering how I would ever face the outside world with my unmistakable marks of humiliation.

Unfortunately, it was often difficult to remind myself of these painful episodes the next time I had the urge to pick. That’s because I always thought “I can resist the urge this time”.

If you’ve ever suffered from the seemingly irresistible urge to pick at your skin, you may have experienced a similar thought process. The Diagnostic and Statistical Manual of Mental Disorders, 5th edition (DSM-5), calls this condition “Excoriation (Skin Picking) Disorder”, but it has historically gone by any number of other “unofficial” names, including Dermatillomania, neurotic excoriation, acne excoriee, psychogenic excoriation, pathological skin picking, compulsive skin picking, and chronic skin picking. It was formally introduced as an “official” diagnosis into the DSM-5 in 2013 after much debate over whether skin picking symptoms were evidence of a distinct condition, or were better explained by another underlying disorder such as OCD, or were just a “bad habit”. Ultimately, the psychiatric establishment and the editors of the DSM-5 categorized it as a separate and distinct diagnosis within the larger category of “OCD and Related Disorders”. In other words, it’s not OCD per se, but it has enough features that are similar to OCD that it is classified as being related to OCD.

Excoriation (Skin Picking) Disorder is defined by the following symptoms:

Excoriation (Skin Picking) Disorder is also less formally described as a Body Focused Repetitive Behavior (BFRB), along with similar conditions such as Trichotillomania (Hair Pulling Disorder), Onychophagia (Compulsive Nail Biting), and compulsive cheek biting. All of these conditions have one thing in common – the repeated touching of one’s body in ways that result in physical damage.

BFRBs are often brought on by anxiety, boredom, physical tension, or other emotional states that leave a person longing for relief. Many sufferers also pick at slight imperfections, pimples, ingrown hairs, calluses, or scabs using their fingernails, tweezers, needles, or other sharp objects. Some may also examine, touch, or swallow any of their removed pieces of skin or scabs.

Skin picking episodes may last anywhere from less than a minute to several hours. For some, their picking is the result of a conscious effort, while for others it is an automatic, unconscious process of which the individual is unaware. And if the perceived “flaw” is successfully removed, the sufferer may feel a sense of gratification or pleasure. Conversely, depending on the severity of the damage, the individual may become socially withdrawn and very insecure about the appearance of their skin. As a result, Social Anxiety Disorder is a common comorbid condition for some struggling with Skin Picking Disorder. Likewise, many people with this condition also experience Body Dysmorphic Disorder (BDD).

While the above explains much of what defines Excoriation (Skin Picking) Disorder, it’s equally as important to define what this condition is NOT: 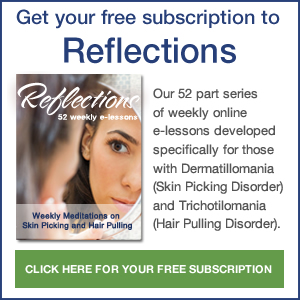 For many people struggling with Dermatillomania, the discomfort of having their struggle described as “just a bad habit” is further compounded in therapy because one of the main treatment modalities used to treat this condition goes by the unfortunate moniker of “Habit Reversal Training (HRT)”. In fact, it is not unusual for this name to lead those seeking treatment to reject a therapeutic approach that can be extremely effective in reducing or eliminating their symptoms.

Unfortunately, some clients hear the word “habit” and immediately assume that their therapist is assailing their “weak” character, or suggesting that their picking is “merely” a simple habit that a stronger person would be able to easily change. On the contrary, therapists who specialize in treating Dermatillomania know that this condition is a function of a deeply ingrained brain pattern that develops over time, and which will require great effort to change. Brain research has found that what are often dismissively described as “habits” involve multiple regions of the brain that work in concert to create deeply entrenched neurological paths that are incredibly rigid and difficult to change. In his book The Upward Spiral, UCLA neuroscientist Alex Korb, PhD, discusses how our brains develop these neural paths when we repeatedly perform similar behaviors again and again over time:

“Each time you follow the same path, it becomes more and more defined in your brain…In addition each time you activate that brain pattern, it becomes easier to activate the next time. So pretty soon, it’s nearly impossible to create a new path – all your brain wants to do is follow old tracks.”

Think of it like driving your car through deep snow. When multiple drivers repeatedly drive through the same tire tracks, the ruts in the snow become deeper and deeper, eventually making it almost impossible for the following drivers to negotiate the road in any way other than to drive in the now deeply entrenched ruts created by previous drivers.

After repeatedly and secretly acting on these picking urges, often for months or years, sufferers typically feel incredibly ashamed about their behavior, and have difficulty asking for support, let alone professional help. One of the consequences of keeping these experiences hidden from others is having to live with the emotional pain, never exploring why this self-destructive behavior continues to happen.

All that being said, the good news is that Excoriation/Skin Picking responds extremely well to therapy that focuses on the following treatment modalities: 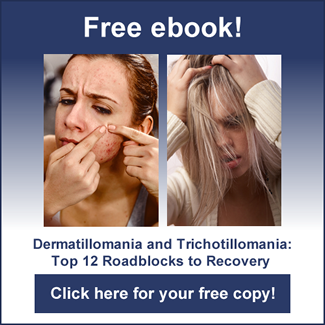 Despite these effective treatment interventions, skin-picking isn’t given much attention in the counseling world, mostly due to a lack of awareness. In fact, in my graduate program in counseling psychology, skin picking was never once mentioned. Unfortunately, this is not an uncommon experience – most graduate programs do not focus on lesser known conditions such as Excoriation/Dermatillomania, and as a result, most mental health treatment providers know virtually nothing about this issue and how to effectively treat it.

I only learned about Excoriation Disorder after researching my symptoms online during my undergraduate studies. After stumbling onto this previously unknown diagnosis, I soon realized that others were just as clueless. When I spoke with coworkers or friends about my self-diagnosis, I often heard them say, “Wow, I wonder if I have that too”. Then, there were family members and friends who offered well-meaning but unhelpful advice like, “Well, just try to stop”.

If only it were that simple.

At the time, I thought it was normal to scan my face, fix my “flaws” and use heavy makeup or antibiotic cream until they healed. Over time, my picking eventually got much worse. Once I started experiencing both intense physical and emotional pain, I realized that this had gone too far. However, I couldn’t stop, nor did I really want to.

Eventually, I realized that I couldn’t interrupt the cycle of skin picking, shame, and avoidance on my own. I decided to start individual therapy, even though I was unsure whether my symptoms even warranted a visit. The first time I told my therapist the real reason I was seeking therapy, I burst into tears. It certainly wasn’t an easy process, but I’m not sure that I could’ve kept that secret to myself for much longer.

Over time, I’ve learned that the goal of therapy isn’t simply to eliminate these behaviors. It is also to understand what this disorder means to me, to gain skills that can give me a better chance of not acting on my urge to pick, and to practice self-forgiveness when I do. I’m fortunate enough to have identified what I was struggling with for so long, and to feel passionate about specializing in the treatment of Excoriation Disorder so that I can help others do the same.

• Crystal Quater, MFT is a psychotherapist at the OCD Center of Los Angeles, a private, outpatient clinic specializing in Cognitive-Behavioral Therapy (CBT) for the treatment of Obsessive-Compulsive Disorder (OCD), Excoriation Disorder, and related anxiety based conditions. In addition to individual therapy, the center offers five weekly therapy groups, including a weekly group for adults with Excoriation Disorder, as well as online therapy, telephone therapy, and intensive outpatient treatment. To contact the OCD Center of Los Angeles, click here.

During the coronavirus emergency, our 12 staff therapists are available for telephone therapy or online, webcam-based therapy.